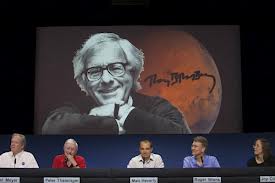 According to The Guardian, the Curiosity team at NASA announced the decision yesterday, on what would have been Bradbury’s 92nd birthday.

“In tribute, I dedicate my landing spot on Mars to you, Ray Bradbury,” the NASA team tweeted. “Greetings from Bradbury Landing!”

Bradbury wrote numerous stories and novels including the story collection The Martian Chronicles, about the colonization of Mars by humans. The Curiosity rover landed on Mars August 5 and recently tested its laser on a Martian rock in preparation of its research mission.

No word yet if the Curiosity mission boosted sales of Bradbury’s The Martian Chronicles or Netflix viewings of Tim Burton’s Mars Attacks!

Kelly Chan at ArtInfo reported on architect Frank Gehry being close to completing his first project in Latin America, the Museum of Biodiversity in Panama City.

Boasting ecological installations from Bruce Mau Design, The Smithsonian Institution and the University of Panama, Chan questioned if Gehry’s museum will adequately represent Panama as a center of biodiversity in addition to bringing the “Bilbao Effect” to Panama City with cultural tourists visiting the star architect’s latest museum building.

BBC America described the Asylum of the Daleks, the debut episode of Season 7 of New Who, as an adventure with the time-traveling Doctor (Matt Smith) and his married couple companions Amy (Karen Gillan) and Rory (Arthur Darvill), facing his oldest foes, the Daleks on a prison planet for the insane.

Asylum of the Daleks already screened for a special British Film Institute preview event and BBC America scheduled an upcoming special U.S. premiere event in New York City. Still, despite the fact that a handful of fans and media have already watched Asylum of the Daleks, Doctor Who producers continued to do a good job keeping series secrets intact.