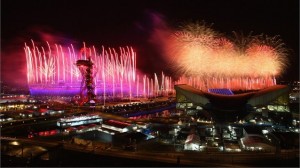 Fireworks light up London's Olympic Stadium at the 2012 Opening Ceremonies.

Fans of filmmaker Danny Boyle’s eclectic movies, from the recent 127 Hours, starring James Franco as a mountain climber pushed to the limit in order to free his right hand from a boulder, to past hits Slumdog Millionaire and Trainspotting, received everything they wished for in a Boyle-directed opening ceremony to the 2012 London games.

In front of a packed house at London’s Olympic Stadium and TV audiences worldwide, Boyle delivered arty riskiness via segments featuring the Kaos choir of deaf and signing children performing and J K Rowling reading the opening lines of J M Barrie’s Peter Pan in a tribute to Great Britain’s National Health Service (NHS). Comedian Rowan Atkinson delivered laughs as a fumbling orchestra member. Kenneth Branagh recited from The Tempest as the stadium grounds turned into industrial revolution-era factories. The blossoming romance of an attractive young couple made a colorful backdrop to the story of social media.

According to The Guardian, Boyle’s wildly inventive segments of British life, history and culture, included Daniel Craig as James Bond accompanying Queen Elizabeth to the opening ceremonies, Muhammad Ali as an Olympic flag-bearer and Sir Paul McCartney as the closing musical act.

NBC opted to cut out the tribute to the 7/7 terrorist attacks in London in 2005 and instead aired special correspondent Ryan Seacrest interviewing swimmer Michael Phelps.

Based on postings to various websites, Boyle’s inventive opening ceremonies earned its share of detractors, to be expected for such a unique public performance. However, Olympics audiences did unite on one common theme: their strong dislike of NBC’s handling of the opening ceremonies.

Gareth Harris reported in The Art Newspaper on plans for an 83,000 square-meter fine art storage facility alongside the Beijing Capital International Airport. The Beijing Freeport, a partnership between the Swiss-based holding company Euroasia and the Beijing Gehua Cultural Development Group, looked to compete with the recently opened Singapore Freeport as well as a planned Freeport scheduled to open in 2014 in Luxembourg.

Jenn Pelly reported in Pitchfork on Animal Collective’s plans for a weekly radio show starting tonight at 9 p.m. EST at radio.myanimalhome.net  with the first segment featuring music curated by Panda Bear and numerous guest DJ sessions. Animal Collective scheduled multiple radio shows leading to their new album Centipede Hz due for release Sept. 4 in the U.S. and Sept. 3 in the UK.