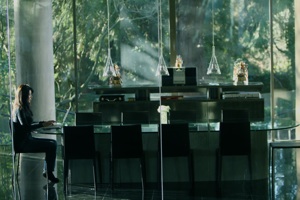 Vancouver-based filmmaker Desiree Lim re-teams with her frequent collaborator, actress Natalie Skye for the genre mash-up The House and the result is a cool, stylish drama part ghost story but mostly dream-like melodrama.

In place of predictable thrills common to haunted house movies, Lim emphasizes the grief, anger and matter-of-fact sense of loss expressed by her characters – both alive and dead.

Jean Kaneko (Skye) is a former investment banker at a Wall Street firm who left behind her well-paid career to travel the world and write a travel book. Jean retreats to the vacant house of a friend’s family for time alone to work on her writing.

While alone in her friend’s sleek, sprawling mansion, a series of ghosts, a young husband and wife (Emilie Ullerup and David Richmond-Peck), the wife’s older brother (Alex Zahara), an immigrant taxi driver (Zahf Paroo) and a rock band member (Zak Santiago) visit Jean. Much like Ebeneezer Scrooge in A Christmas Carol, each ghostly visitation helps Jean cope with her own guilt about working through the 9/11 terrorist attacks and watching the World Trade Center towers crash to the ground as well as her role in America’s recent financial collapse.

There are no jolts in The House; proof of how much Lim tweaks the paranormal elements of her story. Instead, there are a series of melodramatic outbursts; some bordering on soap opera, as each ghost reveals their back-stories to Jean.

Lim brings a unique voice to The House and deserves marks for creative risk-taking as she attempts a somewhat surreal story that veers between the context of The Ghost and Mrs. Muir and the philosophical leanings of Jean-Paul Sartre’s No Exit.

Skye gives a steady, assured performance as Jean, a confident and attractive businesswoman who doesn’t realize the depth of her anxieties.

Unfortunately, Skye and her co-stars have to deal with the story at their fingertips and The House has its share of dramatic stumbles and interview-with-a-ghost moments that crash the storytelling momentum. Still, it’s admirable how Lim aims for the kind of movie mash-up seldom seen in either independent or mainstream cinema.

Lim and her crew also bring a luxurious polish to the story via subtle lighting, steady camerawork and great use of the movie’s single-location storytelling.

The House may be an independent feature with a modest budget but Lim makes full use of her stylish location ripped from the pages of Architectural Digest.

It’s an interesting balance for Lim, who makes her feature-length directing debut with The House after a couple of short films. Her movie may be stark and subtle in terms of its visuals but Lim fearlessly pushes The House to soap opera-like extremes even if that results in some unplanned chuckles.

Still, you have to applaud an emerging filmmaker willing to experiment and take risks at a time when safe and predictable movies are the norm.