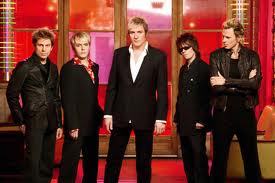 The London 2012 Olympic Games and all its hoopla continue to build with longtime pop stars Duran Duran agreeing to headline a concert in London’s Hyde Park on July 27 – the same day as the Olympics opening ceremony.

“Performing to so many people on the most exciting day in sport will be one of the highlights of the last decade for us,” said Duran Duran’s Simon Le Bon.

The opening concert is just one of a series of events celebrating this summer’s London Olympics including another Hyde Park concert on August 12 to close out the summer games, this time featuring Blur, New Order and The Specials.

Designed to be a bridge between the university campus and the surrounding Richmond, Virginia neighborhoods, highlights of the 38,000 sq. ft. buildings are a café that opens to a sculpture garden and reflecting pond, flexible gallery spaces and a performance hall, all designed to act as a gateway on the busy corner of Broad and Belvidere streets.

Fans continue to count the days to the July 20 opening of The Dark Knight Rises, the final film in director Christopher Nolan‘s Batman Trilogy, aided by the latest viral marketing campaign from Warner Bros. promoting a digital hunt for Batman and a list of real locations with graffiti clues that provide stills from the latest trailer.

Perhaps inspired by one devoted fan who pasted all the stills together into a handmade trailer, Warner Bros. is making the latest Dark Knight Rises preview available via The Hollywood Reporter a couple of days before it screens before showings of another superhero epic, The Avengers.

The excitement over the latest Dark Knight Rises trailer makes one thing clear. Christopher Nolan’s final Batman film is at the top of fans’ excitement lists for the summer movie season.