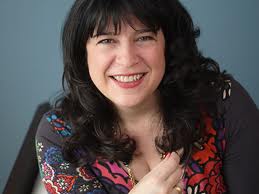 After a highly contested Hollywood bidding war for the rights to Fifty Shades of Grey, with the showbiz trades reporting on each studio meeting with James and her reps at the Soho House in Los Angeles, the explosive launch of her eight-city East Coast book tour is expected.

Still, in an interview with The Associated Press, James admits to be being surprised by the overwhelming response to the book.

“I’m staggered by this,” says James, who admits to trying her hand at writing a novel before and coming up short. “I tried a couple of times but never thought I could. It’s really quite daunting.”

James plans Fifty Shades of Grey to be the first in a trilogy of stories following the recent release of her debut novel by the Random House division Vintage Books.

Casting news over who will play Anastasia will bring extra attention to James’ upcoming books in the Fifty Shades of Grey series. After landing the adaptation rights, Universal Pictures plans to move quickly on a movie version at its art house label Focus Features.

Daniel Craig and co-stars Naomie Harris, Judi Dench, Javier Bardem and Ralph Fiennes continue to stay busy on director Sam Mendes‘ much-delayed James Bond adventure Skyfall but Tom Jones jumps into the Agent 007 spotlight with a recent interview in Radio Times magazine revealing he was once considered to play the Bond in the movies.

“The only thing I regret is that I’d like to have had a pop at acting when I was younger,” Jones says, via a report in The Guardian. My name was up for James Bond at one time but producer Albert “Cubby” Broccoli apparently said I was too well known for people to believe it.”

The newest Bond adventure Skyfall is due in cinemas this fall on the 50th anniversary of the release of Dr. No with Sony Pictures confirming a late 2014 opening date for Bond 24. With Sony’s commitment to a quick turnaround on the next Bond adventure, Jones may be in the perfect position to lobby for his long-delayed role in the James Bond franchise.

Maybe Jones can play a retired British spy who offers Bond some unexpected help? Can you picture it?