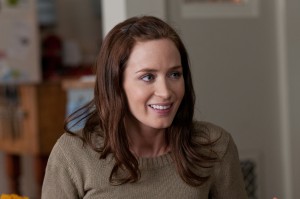 One of my favorite books is James Agee‘s 1941 collaboration with photographer Walker Evans, Let Us Now Praise Famous Men. Agee’s book about Alabama sharecroppers, a community of hardworking but mostly forgotten people, reminds me of the supporting players, up-and-comers, undiscovered artists and talented crewmembers working in the shadows of the celebrities around them. That’s why I call this column Let Us Now Praise and why I’m putting the spotlight on the up-and-coming actress Emily Blunt.

Jason Segel may be better known due to his work on the hit TV sitcom How I Met Your Mother, but Blunt steals the show from her better-known co-star on the Universal Pictures relationship comedy The Five-Year Engagement.

Segel and Blunt play a couple, Tom Solomon and Violet Barnes, who struggle with career relocations and unexpected challenges that continue to delay their wedding.

Co-writer and director Nicholas Stoller (Forgetting Sarah Marhsall, Get Him to the Greek) gives the best gags to Segel, including a funny flash of his bare butt. Blunt keeps her bum covered but bests the Five-Year Engagement boys when it comes to balancing romance and gross-out gags. Maybe Blunt‘s British accent provides a welcome dash of sweetness to the film’s scenes of raunchy humor. Perhaps her freckly prettiness keeps the slapstick bursts grounded. What’s worth noting is how Blunt always makes her well-known co-stars look better: Matt Damon‘s Senatorial candidate in The Adjustment Bureau; Anne Hathaway‘s fashion magazine assistant in The Devil Wears Prada; even Jack Black‘s travel writer who lands on the island of Lilliput in the forgettable reboot of Jonathan Swift‘s Gulliver’s Travels.

I’m not saying that Blunt makes The Five-Year Engagement a comedy to celebrate but at least she makes it worth watching thanks to her believable performance alongside Segel as well as supporting players Alison Brie, Jacki Weaver and Rhys Ifans.

There’s another remarkable thing worth noting about Blunt. How she makes forgettable movies forgivably better. Wild Target, Sunshine Cleaning and The Great Buck Howard all are worth watching due to Blunt’s easygoing charm and razor-sharp wit.

When the material shines, like Lynn Shelton upcoming sibling comedy Your Sister’s Sister, co-starring Rosemarie DeWitt, Mark Duplass and Mike Birbiglia, or Blunt’s debut feature some eight years ago, the coming-of-age romance My Summer of Love from director Pawel Pawlikowski, Blunt truly sparkles like no other.

Up next for Blunt is Rian Johnson‘s sci-fi, time-travel action thriller Looper starring Joseph Gordon-Levitt and Bruce Willis (once again, better-known leading men). Looper looks to be an action-packed change of pace for Blunt, far edgier and faster-paced than her previous action movie The Adjustment Bureau.

Will Looper be the film that finally pushes Blunt to A-list status? Why should that matter? Still, it’s exciting to contemplate of a movie project coming together with an up-and-coming actor being paired with the better-known Emily Blunt. That’s always the case with favorite up-and-comers. You want others to come aboard and celebrate an actress like Emily Blunt for the same reasons you do.