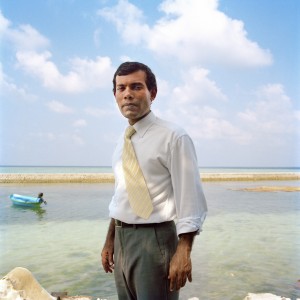 A talent for storytelling is what separates veteran documentary filmmaker Jon Shenk from the scorched landscape of reality television. His belief in the timeless pursuit of crafting a compelling, personal tale allows him to tackle a large-scale, sociopolitical subject like global warming and the drive to reduce carbon emissions and turn it into a film about one man’s journey form jailed activist to the leader of his island nation and a spokesperson for the world on the subject of reducing carbon emissions.

The Island President, Shenk’s first feature-length documentary since his 2003 movie The Lost Boys of Sudan, tells the story of Mohamed Nasheed from his two decades working as an activist to bring democracy to his island home of the Maldives, his wrongful imprisonment, subsequent release and election as the Maldives president at just forty-one years old.

The Island President, currently in select theaters and slowly expanding nationwide via Samuel Goldwyn Films, is a timely and worthy topic but it’s Nasheed who makes the movie shine.

Working with editor Pedro Kos, Shenk mixes archival news footage of past interviews with Nasheed’s travels to the United Nations in Manhattan and the 2009 Copenhagen climate summit to show his commitment for reducing carbon emissions.

Global warming is a fiery and divisive debate but Shenk allows his story to unfold with subtlety and always keeps Nasheed front and center. In fact, many of the film’s highlights revolve around its quieter moments like Nasheed watching football at a Manhattan sports bar with a member of his staff and delicately trying to figure out the best way to eat a hamburger.

Shenk, who also shot the film, captures the Maldives in all its sparkling beauty and makes clear the tragedy of losing this island territory to the rising sea. Music by Radiohead, Stars of the Lid and Marco D’Ambrosio complement the stunning photography.

Shenk also brings The Island President to its conclusion with closing credits informing viewers that Nasheed has stepped down as president in order to prevent a military coup from turning violent in the Maldives.

Nasheed’s amazing journey continues as he meets with world leaders on the subject of climate change despite his ouster last month. Thankfully, Jon Shenk puts all his storytelling skills to great use and captures a chapter in Nasheed’s life via The Island President.

← The Morning Feed: Michel Gondry’s ‘The We and I’ leads Cannes 2012 Directors’ Fortnight
Let Us Now Praise: The Five-Year Engagement actress Emily Blunt →

1 comment for “‘The Island President’ Review: Director Jon Shenk makes the climate change issue into a story of one man’s amazing journey”