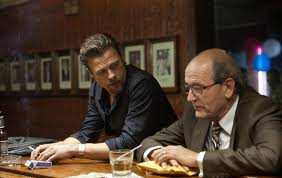 Film buffs worldwide are already debating the movies chosen for the 65th Cannes Film Festival, which announced its program today via a press conference led by delegate general Thierry Fremaux at Paris’ Grand Hotel. London’s The Guardian posts a complete list of the films spotlighting new works by veterans such as Ken Loach (The Angel’s Share), Abbas Kiarostami (Like Someone in Love), and Michael Haneke (Amour) as well as movies from up-and-comers Jeff Nichols (Mud) and Lee Daniels (The Paperboy).

Andrew Dominik‘s Brad Pitt mob drama Killing Them Softly, based on veteran crime writer George V. Higgins’ novel Cogan’s Trade, will to compete for the Palme d’Or along with Jacques Audiard‘s Rust and Bone, Walter Salles‘ On the Road and David Cronenberg‘s Cosmopolis.

Filmmaker Wes Anderson‘s MOONRISE KINGDOM is the opening film for the 65th edition of Cannes and Therese D., the final film from the late French master Claude Miller, will be the closing film.

The 65th edition of Cannes begins May 16.

With plenty of designers visiting Frankfurt for Light+Building 2012, the leading trade fair for architecture and technology, the Daily AD blog at ArchDigest puts the spotlight on the newly opened addition to the German city’s Städel Museum, a 32,000=square-foot underground gallery designed by the architecture firm Schneider+Schneider. The addition’s highlights are its 195 custom windows that provide an artful glow at night.

Coachella 2012 Weekend 2 starts tomorrow, with the first installment of musical acts repeating exactly for the final weekend. The fine folks at the Pop & Hiss blog at the L.A. Times select their must-see acts based on their weekend one likes and dislikes.

Yes, the Tupac hologram will be back, but check out these suggestions: Pulp, with frontman Jarvis Cocker providing plenty of inspired banter between songs; The Hives; Kaiser Chiefs, Flying Lotus and Gary Clark, Jr.