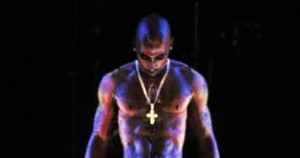 After its successful Coachella fest debut, the Tupac hologram may go on tour.

Coachella fans are still talking about Dr Dre and Snoop Dogg dueting onstage with a hologram Tupac as part of a tribute to the late rapper who was shot and killed in Las Vegas in 1996 at age 25.

At the very least, the Tupac hologram, reportedly created at a cost close to $400,000, will return for Coachella’s second weekend.

Darren Aronofsky adds another high-profile project to his prep list with the Hollywood trades and multiple show biz sites including Upcoming-Movies confirming acquisition talks between Paramount Pictures and the veteran filmmaker’s Protozoa Pictures for The General, a George Washington drama from scribes Adam Cooper and Bill Collage.

Described more as a thriller in the vein of Clint Eastwood’s western Unforgiven than some straightforward costume drama, The General joins another Aronofsky film that’s generating plenty of attention, his epic telling of the Noah’s Ark story to be called Noah with Russell Crowe as the biblical hero.

Moving forward with Noah and The General takes the sting out of recent setbacks for the Black Swan director, who lost the Superman reboot gig to Sucker Punch director Zack Snyder and walked away from the Wolverine sequel and Robocop remake.

Personally, Noah and The General appear to be better matches to Aronofsky’s creative spirit than Wolverine.

It’s the midway point for the 2012 Whitney Biennial, on display at the Manhattan museum through May 27. The Biennial celebrates the artistry of the late avant-garde filmmaker George Kuchar with a series of film and video screenings beginning today and running through April 22 on the museum’s second floor. A major part of the series is Kuchar’s Weather Diaries cycle, filmed over multiple visits to the El Reno hotel in Oklahoma’s tornado alley.

1 comment for “The Morning Feed: Tupac hologram may go on tour after successful Coachella debut”