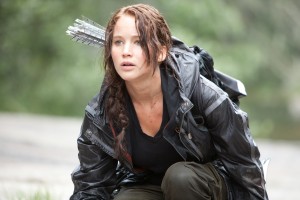 Jennifer Lawrence stars as Katniss Everdeen in 'The Hunger Games.'

No surprises. That’s the understanding from The Hunger Games faithful filling cinemas as I write this, beginning late last night and into the wee hours to a tune of $25 million in ticket sales.

All of the suspense from the film’s pre-production, revolving around who would play Katniss Everdeen; to the North Carolina-based shoot where an abandoned village becomes depressed District 12; and the daily news bites, fan footage, and on-location snapshots dissolve into a movie that’s understandably loyal to the book.

Director and co-writer Gary Ross, co-writer Billy Ray and co-writer and author Suzanne Collins accurately recreate the book’s story of an apocalyptic future where pairs of children from 12 districts are chosen by the government to fight one another to the death on TV. Sixteen-year-old Katniss Everdeen (Jennifer Lawrence), a resident of District 12, volunteers for the games in order to protect her younger sister Primrose (Willow Shields) and uses her archery skills to help survive the deadly contest.

The Hunger Games faithful are in full force at a Cincinnati multiplex for an advanced screening of Ross’ sprawling adaptation. I’m also a fan of Collins’ books but my fandom doesn’t compare to the crowd around me. Many of the women; both young and old, sport Katniss-inspired braided hair. Others wear Hunger Games t-shirts. Unfortunately I don’t see one person with a bow and quill of arrows in honor of Katniss’ fighting skills.

Ross and his team follow Collins’ book religiously and there’s not a moment in The Hunger Games that surprises the faithful around me except for the fact that actor Woody Harrelson as Haymitch Abernathy, the former winner of the District 12 Hunger Games who’s become a lush but rises up to help Katniss in the fight-to-the-death tournament, is not as consistently drunk in the movie as he is in the book.

By the time the movie ends with its subtle set up for the next installment in the planned four-film franchise, it’s clear that the faithful are extremely happy and like the movie a bit more than I do.

Granted, we do agree on one key thing. Jennifer Lawrence is amazing as Katniss, brave, tough and utterly engaging in every scene. Combining her action performance from X-Men: First Class with her tough role in the acclaimed drama Winter’s Bone, Lawrence becomes the great action heroine with The Hunger Games.

Lawrence also becomes Teflon, a proven commodity, guaranteed to attract crowds of moviegoers as long as she’s playing Katniss; something she’ll be doing for the next few years.

I suppose that’s the trade-off The Hunger Games faithful are willing to make when it comes to watching their favorite book come to life as a movie. They’re not interested in surprises, tweaks or creative license. They want a moving image photocopy, a point-by-point reproduction of the story they know by heart. They want what they already know and despite the fact of already knowing how the story ends they still leave the cinemas smiling, ready to get back in line and watch again with a different group of friends.

Now, that’s Teflon and in the risky business of moviemaking, that’s quite an achievement.