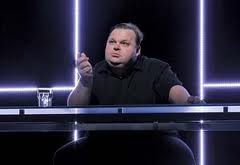 Mike Daisey performs 'The Agony and the Ecstasy of Steve Jobs.'

The debate continues over NPR’s This American Life retracting its January 6 episode featuring Mike Daisey’s solo theatrical show of The Agony and the Ecstasy of Steve Jobs, a two-hour monologue of Daisey explaining his brand loyalty for Apple products, his opinion on former Apple head Steve Jobs and an account of his trip to Shenzhen, China and a visit to the Foxconn plant that builds Apple products.

Rooney takes a step back from the controversy and makes comparisons to the late Spalding Gray, Augusten Burroughs, James Frey and JT LeRoy, the identity created by writer Laura Albert, in order to debate the question over how much creative license Daisey deserves in his theatrical piece.

Meanwhile, Daisey stands behind his work, which opened at New York’s Public Theater last Oct. 17, and before that at The Woolly Mammoth Theatre Company in Washington D.C., via a new posting on his blog.

“I stand by my work, Daisey writes on his blog. “My show is a theatrical piece whose goal is to create a human connection between our gorgeous devices and the brutal circumstances from which they emerge…What I do is not journalism.”

Norman Lebrecht reports on his Slipped Disc blog on Sunday’s Lincoln Center performance by Distinguished Concerts International New York that made history for reasons other than the music.

Billy Hurbaugh, a member of the Santa Barbara Choral Society and his longtime partner Randall Day, a priest at St. Marks-in-the-Valley church, enter the history books as the first couple to get married during an actual concert at New York’s Lincoln Center after a performance by Hurbaugh of Mozart’s Requiem.

Lebrecht points out that the occasion was especially poignant since the couple first met at concert of sacred music at St. Thomas Church in New York City close to 21 years ago.

A court in Karlsruhe, Germany rules that 4,000 art posters are to be returned to their owner’s family after the Gestapo seized the collection of art from the Berlin home of Jewish dentist Hans Sachs in 1938.

The Guardian reports that the case goes back to 2005 when Sachs’ son Peter discovered that his family’s collection of posters including works by Henri de Toulouse-Lautrec and Lucian Bernhard had been housed at the German History Museum since 1966.

“I can’t descibe what this means to me,” Peter Sachs says in a report in London’s Guardian. “It feels like vindication for my father, a final recognition of the life he lost and never got back.”

In exchange for the the collection, Peter Sachs pledges to return the 225,000 deutschmarks he received in 1961 from the West German government as payment for his family’s loss.