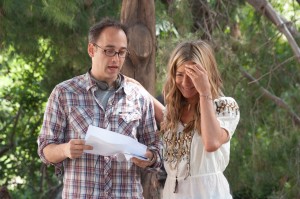 Here’s my creative stretch. Agee’s book about Alabama sharecroppers, a community of hardworking but mostly forgotten people, reminds me of the supporting players, up-and-comers, undiscovered artists and talented crewmembers working in the shadows of the celebrities around them. Really. That’s why I call this column Let Us Now Praise and why I’m putting the spotlight on the comic filmmaker, artist and son of Shaker Heights, Ohio, David Wain.

People think of the current Universal Pictures comedy Wanderlust as a Jennifer Aniston comedy simply because she’s the only celebrity in the movie. Perhaps, if they’re feeling generous they refer to Wanderlust as a Jennifer Aniston and Paul Rudd comedy since they co-star as George (Rudd) and his wife Linda (Aniston) who leave their cherished West Village micro-loft and Manhattan lifestyle after George loses his job. The luxury goods-fixated couple end up in a hippy commune in rural Georgia named Elysium with ample drugs and free love. That’s when the fish-out-of-water laughs start.

Aniston enjoys some hilarious moments as a struggling documentary filmmaker who just can’t find the right creative job. A disastrous pitch of her film about penguins with cancer to HBO execs is one of the funniest bits Aniston has done in a long time.

Paul Rudd is even funnier as George, a materialistic, career climber unsure if he can adjust to Elysium’s hippy ways, well, except for the free love.

A desperate couple dropping out of society is a tried-and-true comic premise but Wain boosts Wanderlust with bursts of zaniness familiar to his small group of devoted fans.

Perhaps Wain is just too insane for mainstream audiences. The best bits about Wanderlust, a nudist winemaker who’s also an aspiring author; a hippy mother that refuses to cut the umbilical cord from her newborn baby, George’s obnoxious brother and his suburban, McMansion lifestyle, are far more surreal than anything seen in an Apatow comedy.

Sure, the Hangover boys are far raunchier but Wain gives sax gags a unique and surreal spin unlike other studio comedies. Maybe that’s why audience response is modest so far for Wanderlust. That’s ok, just more David Wain for the rest of us lovers of the whacky.