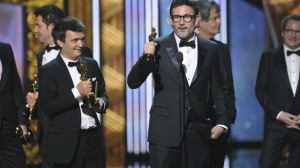 'The Artist' wins the key prizes including Best Picture at the 84th Academy Awards Ceremony.

Monday morning pundits, myself included, point to Sacha Baron Cohen’s red carpet appearance as Admiral General Aladeen, his character from his upcoming comedy The Dictator, as the main highlight of the 84th Academy Awards Ceremony last night in Hollywood. It’s hard to imagine Oscars host Billy Crystal or any of the winners besting Baron Cohen dumping the “reported” ashes of former North Korea dictator Kim Jong Il all over E! host Ryan Seacrest. Still, what’s surprising is just how poorly Crystal performed for his ninth time as host of the Academy Awards telecast and the complete lack of Oscar surprises as the art-house favorite The Artist won key prizes including Best Picture, Best Director and Best Actor in a Leading Role. Want to know the biggest Oscars surprise of the evening? The growing chatter on Twitter that 2011 co-host James Franco wasn’t so bad after all.

World Book Day is March 1 — any special plans? — and the Bodleian Library in Oxford, England is celebrating by displaying for one day a recently discovered portrait of Jane Austen.

In addition to the pencil drawing of Austen, The Guardian reports that a piece of needlework stitched by the beloved author as a young girl; will also be on display. The sampler, believed to be from 1787, is on loan from a private collector.

The Sundance Institute continued to work on programming for its first ever London edition of the popular independent film fest to take place April 26-29, 2012 at The O2 as a four-day event with an emphasis on American independent film and independent music.

Musician and actor Tricky announced that he would reunite with vocalist and musician Martina Topley-Bird for a April 27 performance of his debut album Maxinquaye in its entirety.

“It is an honor to play the first Sundance London,” Tricky said in a release. “To me, Sundance is like the opportunity Island and Chris Blackwell gave me; a chance for an artist to make their art without compromise for commercial reasons.”

“Time will tell how it works but we’re coming in very small,” Redford said at the time of the initial Sundance London announcement. “I’ve wanted to come to London for a long time and it was a question of how and when. It could only happen if there was someone who wanted us.”