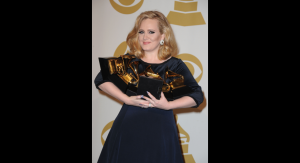 Celebrity culture and the public’s fascination with awards shows collided this weekend with Saturday’s death of six-time Grammy winner Whitney Houston casting a mournful mood over the the 54th Annual Grammy Awards.

Granted, much of the Grammy Awards was the same with music stars like Rihanna wowing the Red Carpet press at the STAPLES Center in Los Angeles with her custom Giorgio Armani gown and Nicki Minaj – fresh from accompanying Madonna at her Super Bowl Half-Time show — flashing a Red Riding Hood-inspired gown by Donatella Versace.

But Grammys host LL Cool J placed the night’s razzle-dazzle in perspective when he offered a prayer to the late Houston.

“There is no way around this, we’ve had a death in our family,” LL Cool J said.

Jennifer Hudson sang Houston’s best-known song “I Will Always Love You” as a last-minute tribute and other artists like Alicia Keys and Bonnie Raitt dedicated their performances to Houston.

Other highlights included Brian Wilson appearing with the Beach Boys for the first time in years for a performance of “Good Vibrations,” a tribute to Country legend Glen Campbell and British vocalist Adele sang “Rolling in the Deep” for her first public performance since vocal cord surgery.

Adele led all Grammy Winners by winning  all the awards from her six nominations including song and record of the year; tying Beyoncé for most wins by a sole female artist in one year.

The best news for the Recording Academy was the overnight ratings of 40 million viewers for the Grammy Awards; its largest TV audience since 1984.

Across the pond in London were the 65th British Academy Film Awards (Baftas) and The Artist, the black-and-white, silent film set in the early days of Hollywood, was the big winner with Baftas for best actor (Jean Dujardin), best director (Michel Hazanavicius), best film, best original screenplay and best score (Ludovic Bource).

Meryl Streep won the best actress Bafta for her performance of former U.K. Prime Minister Margaret Thatcher in The Iron Lady and Octavia Spencer (The Help) and Christopher Plummer (Beginners) won for supporting actress and actor.

Thanks to the Baftas, The Artist officially became the runaway favorite to clean up at the Oscars and Guardian film editor Catherine Shoard called The Artist  “the rottweiler of the awards season;” meaning the film devouring all the prizes in its path.

Far away from red carpets and awards statues, the acclaimed AMC series The Walking Dead returned for its midseason premiere picking up from the last episode prior to its winter break with Rick (Andrew Lincoln), the former small town sheriff and leader of the ragtag group of human survivors, killing the undead girl named Sophia, a missing member of his group who became part of a group of zombies secretly held in the barn of their elderly host (Scott Wilson) named Hershel.

Fans lit up the Twitterverse discussing the lack of the series’ trademark gore in Episode 208 “Nebraska” except for a brief scene of a zombie arm falling off a pickup truck.