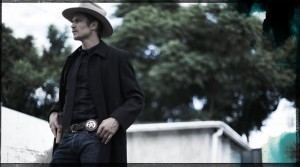 Fans that can trace Timothy Olyphant’s acting career back to the 1999 Sundance teen comedy Go (okay, I’ve given myself away) know that the FX series Justified has a leading man without equal. The surprise is that while Go director Doug Liman has gone on to be a director of super-sized blockbusters (The Bourne Identity, Mr. and Mrs. Smith), Olyphant’s best work continues to be on the small screen courtesy of writer and showrunner Graham Yost’s entertaining adaptation of Elmore Leonard’s short story Fire in the Hole.

Granted, Olyphant has plenty of film work to his credit, I Am Number Four, The Crazies, Live Free or Die Hard, but none of his film roles compare to his easygoing charm and likable presence as U.S. Marshall Raylan Givens, who’s transferred from Miami to his boyhood home of Eastern Kentucky to battle the drug dealers and outlaws who call the rural coal mining towns home; many of them people he knew growing up.

Season 3 begins picking up the pieces of last year’s climax with Givens slowly recovering from a gunshot wound and the show’s main villain, the Ma Barker-like kingpin Mags Bennett (Margo Martindale) dead by her own hand.

It’s still unclear how much Justified will miss a colorful character like Mags but Yost does a solid job moving forward with a fast-paced plot involving a vicious hitman named Fletcher “Ice Pick” Nicks (Desmond Harrington) with a penchant for knives and a new criminal in town (Neal McDonough) all while keeping the spotlight on Givens.

Walton Goggins returns as the villainous Boyd Crowder, back in prison but still managing to make trouble. With a swift swing of a cast iron frying pan, actress Joelle Carter reveals that Ava Crowder, Boyd’s pretty girlfriend, may turn out to be a worthy replacement for Mags.

Still, all that’s wild and wonderful about FX’s pseudo western belongs to Timothy Olyphant who sprints with a character tailored hand-in-glove to his charms and outdoes his previous standout work on the series Damages and Deadwood.

A great adversary like Mags and Martindale’s evil performance are once-in-a-million occurrences. Still, as long as Olyphant stops to put on Givens’ trademark Stetson, it’s safe to say that Justified will remain one of TV’s best dramas.

1 comment for “TV Savage: Review of Season 3 Debut of ‘Justified’”