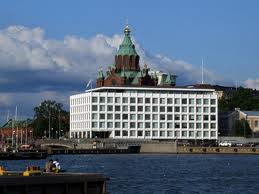 The Solomon R. Guggenheim Foundation proposed a new overseas museum today to be built on city property on Helsinki’s south harbor next to the Alvar Aalto designed headquarters of the Finnish company Stora Enso.

According to The Telegraph, Guggenheim Foundation adminatrators presented their building plans after a yearlong feasibility study.

Recently, the Guggenheim placed its proposed Frank Gehry designed outpost in Abu Dhabi on hold due to “the immense magnitude of the work.”

As part of its Helsinki proposal, Guggenheim reps spoke about the museum’s ability to attract cultural tourists as well as complement the existing Helsinki Art Museum with a strong modern art collection.

Helsinki city leaders planned to decide in the next couple of weeks whether to move forward and collaborate with the Guggenheim on the project.

The 2012 North American International Auto Show opened its doors at the COBO Center in Detroit with convention floor exhibits currently available to the press and welcoming the general public Friday.

Molly Cotter at Inhabitat took a look at some of new cars including the Lexus LF-LC hybrid sports coupe, described as half sports car and half sedan; and Volkwagen’s new electric VW Beetle called the E-Bugster. Auto pundits predicted hybrid vehicles and smaller cars to be the stars of the 2012 Detroit show.

Veteran writer/director Frank Darabont shocked fans when he abruptly left the hit AMC zombie serial The Walking Dead last July due to disputes over budgets and schedules. Darabont, best known for his feature films The Green Mile and The Shaswshank Redemption, quickly boarded a new TV project agreeing to write, direct and executive produce the pilot for TNT’s L.A. Noir, a drama set in the ‘40s and ‘50s based on the battles between LAPD Chief William Parker with corrupt members of his squad as well as colorful underworld characters like Mickey Cohen.

Based on John Buntin’s book, L.A. Noir: The Struggle for the Soul of America’s Most Seductive City, The Hollywood Reporter confirmed that producer Michael De Luca (The Social Network) joined the project along with producer Elliot Webb and co-executive producer Alissa Phillips.

“Noir is a passion of mine so I feel blessed to delve into a project that speaks in the hard boiled vernacular,” Darabont told The Hollywood Reporter. “John Buntin’s superb book, though nonfiction, is our touchstone and inspiration for the stories we’ll be telling, weaving fiction throughout the facts and facts throughout the fiction.”