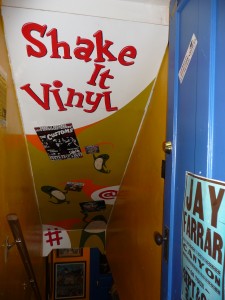 The basement steps at Cincinnati's Shake It Records leads to many of its vinyl bins.

My holiday itinerary reached its funkiest beat when my visiting teen niece Natalie asked to visit the local indie record store in search of vinyl records. Her excitement at discovering racks of alternative vinyl albums in the basement of Cincinnati’s Shake It Records was a flash-forward peek at yesterday’s Billboard report on Soundscan’s year-end album sales charts. The biggest surprise was the stat showing that vinyl record sales reached 3.9 million unites in 2011, an impressive 39.3 percent gain of 2.8 vinyl record sales in 2010 and the most vinyl sales since SoundScan began gathering stats in 1991.

My vinyl collection of 12-inch British singles featuring long-forgotten indie pop stars from The Flatmates to The Primitives was sold a long time ago. Until my millennial niece started gathering up vinyl last week, all the vinyl junkies I knew were middle-aged guys meeting up in weekly clubs to listen to obscure Blues albums.

In the basement of Shake It Records, I watched my niece beg her father for additional money so she could buy her entire stash of vinyl and I learned first-hand that millennials were taking a break from iTunes for a more classic music experience.

Of course, heading out of the store, my niece confessed she still needed to save up her money for a turntable. She just wanted to start her vinyl collection first.

Note: The Beatles’ Abbey Road led all 2011 vinyl sales with Fleet Foxes’ Helplessness Blues close behind. Did you buy vinyl last year? Do you plan to return to vinyl in 2012?