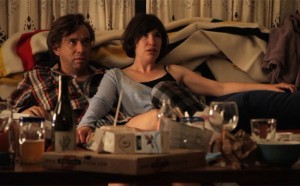 For all the loyal fans that missed the sold out Portlandia The Tour stops, the good news is that the Season Two premiere of Portlandia featuring Fred Armisen and Carrie Brownstein finally lands 10 p.m. EST Friday on IFC. Check out an an audio report of a recent Portlandia press luncheon at Bitch Magazine to get your excitement motor running in time for the show’s broadcast premiere.

Sure, you can stream the entire second season episode “One Moore Episode,” about a fast obsession with the sci-fi series Battlestar Galactica but it’s not the same as watching in the classic, gather round the flat screen, drinking Jean Luc Godards (shaken, not stirred) kind of way.

Then again, why not take time away from work and stream it, then watch it again Friday with friends, being sure to laugh at all the jokes before they do. Very Portlandia.

Holiday visits to grandma’s house, or your favorite auntie, probably include staring at a living room display cabinet filled with grandma’s prized porcelain figurines like a young girl feeding straw to a goose.

New York-based artist Jessica Stoller reinterprets the tabletop figurines she remembers from her mother and grandmother with a smart feminist twist while adering to classic technique like 18th century lace draping.

Hi-Fructose shines the spotlight on Jessica Stoller with a current photo gallery of recent work including a beautiful piece of a beheaded Marie Antoinette.

Stoller is currently taking part in the Open Studios program at the Museum of Arts and Design (MAD) at Columbus Circle in New York City. Stop by and ask about her recent residency at the Kohler factory and the inspiration of watching the Kohler craftspeople create countless toilets and sinks.

Sony Pictures co-chairman Amy Pascal tells EW that they’re moving forward with The Girl Who Played With Fire, the sequel to their English-language version of The Girl With the Dragon Tatoo starring Rooney Mara as punk computer hacker Lisbeth Salander and Daniel Craig as disgraced journalist Mikael Blomkvist.

At least for now, Pascal’s report wipes away speculation about the mediocre box office earnings of Girl With the Dragon Tattoo sidelining the adaptation of the second book in Stieg Larsson‘s trilogy.

Steve Zaillian, who scripted Girl With the Dragon Tattoo, is currently working on the adaptation of The Girl Who Played With Fire and Mara and Craig are signed up for the film.

Of course, the best way to ensure Sony producing The Girl Who Played With Fire is to go and watch The Girl With the Dragon Tattoo.

1 comment for “The Morning Feed: Countdown to Season 2 Premiere of IFC’s ‘Portlandia’”