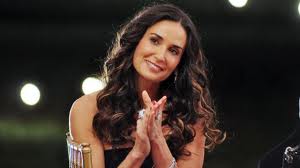 Still, it’s Moore, last seen in the art-house dramas Margin Call and Another Happy Day, who looks to bring a a publicity boost to the film as Steinem, according to The Hollywood Reporter. No word yet from America’s leading feminist but I have to think Steinem is pleased with the casting choice, not just for Moore’s good looks but also her strong pro-women views.

“I’m just glad I caught some of them when I did,” Jump tells the Daily News. “It hits people on many different levels. It has a broader audience than people who are just interested in New York.”

Jump, who teaches at a public school in Brooklyn when he’s not scouring the boroughs for fading street ads, says the book grew from his 1998 photo exhibit at the New York Historical Society.

There’s also a chance for a follow-up book, this time with a focus on the fading ads of Queens. But Jump will have to hurry. Who knows how long these street ads will be around?

One of the first blockbuster exhibitions of 2012 looks to be David Hockney RA: A Bigger Picture at London’s Royal Academy of Arts. The show, featuring  the 74-year-old artist’s iPad drawings, a series of films as well as the first public display of new landscape paintings of his native Yorkshire, runs Jan. 21 thorugh April 9.

“It’s not a retrospective,” Hockney points out to The Guardian. “When they came to me three or four years ago, many of the pieces that are in the exhibition did not exist.”