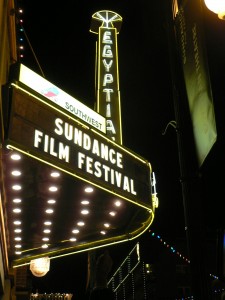 The festival’s premieres sections often generate the most publicity at Sundance due to the films’ celebrity casts. This year’s premieres titles include director Nicholas Jarecki’s Arbitrage, starring Richard Gere as a corrupt hedge fund manager; and the divorced couple comedy Celeste and Jesse Forever, starring Rashida Jones and Andy Samberg. Premiere documentaries include directory Timothy Greenfield-Sanders’ About Face, a look at the beauty industry and aging through the eyes of the first supermodels; and Rapper and actor Ice-T stepping behind the camera with co-director Andy Baybutt for Something From Nothing: The Art of Rap; a look at the origins and history of Rap.

“The fact that most of the premieres have been produced completely independently further underscores the resourcefulness and tenacity of filmmakers in this climate,” Cooper says in a release. “That drive and entrepreneurial spirit has pushed narrative films that will both dazzle and enlighten.”

The opening day films are Hello I Must Be Going from Todd Louiso and The Queen of Versailles from Lauren Greenfield.

In addition to Harvey Pekar’s CLEVELAND, Harvey’s widow, Joyce Brabner tells Cleveland.com that she’s continuing to raise funds for a desk and sculpture of Pekar to be designed and installed at one of Pekar’s favorite haunts, the Cleveland Heights-University Heights Library.

Just in time for the last few weeks of holiday shopping, WWD confirms a Dec. 7 opening for a pop up shop from GQ magazine and online retailer Park & Bond.

Scheduled to operate until De. 18 at 414 West 14th Street in Manhattan’s Meatpacking District, the GQ/Park & Bond pop up shop promises an assortment of goods inspired by GQ Selects and the magazine’s Best Stuff of the Year feature.

“It poses the question, what would GQ look like if it was a store,” Chris Mitchell, GQ’s publisher, tells WWD. “We think it’s a natural way to bring the brand to life in real time.”

In the spirit of multi-platform branding, maybe if shoppers wish extra hard, GQ and Park & Bond will partner on a permanent shop.