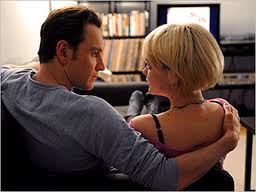 Michael Fassbender’s powerful performance as a New Yorker struggling with sex addiction and London-born artist Steve McQueen’s precise directing are the highlights of Shame, arguably one of the year’s best movies. Still, the majority of the publicity on the Fox Searchlight release revolves around its NC-17 rating and whether audiences will stay away because of it. Fox Searchlight opens Shame in limited release today in key urban markets where the NC-17 rating will have little if any negative impact. The fun will be watching Shame expand wide throughout December and seeing if Fox Searchlight can erase the NC-17 stigma. If one film can do it, it’s Shame. It’s that good.

Another sexual drama arrives in cinemas this weekend as well as VOD, this one courtesy of IFC Midnight and Australian author and first-time filmmaker Julia Leigh. Sleeping Beauty stars Emily Browning (Sucker Punch) as a college student working multiple jobs in order to cover her bills. A job as a lingerie-clad server at a private club leads to its owner, Madame Clara (Rachael Blake) to hire Lucy as a “sleeping beauty,” someone who lies drugged asleep and naked on a bed so the club’s elderly clients can do whatever they want with her minus sexual penetration. Leigh offers a fresh and dreamlike take on the world of prositution and Browning is amazing in Sleeping Beauty. Credit IFC for releasing the biggest conversation-starter this holiday season.

Complementing the films from emerging directing talent like McQueen and Leigh is world master Takeshi Kitano, whose latest film, the gangland drama Outrage opens in select theaters and VOD from the Magnet genre label of Magnolia Pictures. Kitano also stars in the film under his actor alias Beat Takeshi as a veteran yakuza battling competing gang leaders for the support of the leading Japanese crime family.

The American Cinematheque at the Egyptian Theatre presents the Los Angeles premiere of Dirty Old Town, an On-the-Bowery inspired tale about the owner of a Lower East Side junk store (William Leroy) given 72 hours to pay rent and save his shop from closing. Co-directors and co-writers Jenner Furst and Daniel B. Levin, who work together on the Sundance Channel series Brick City, partner with co-writer Julia Willoughby Nason to tell the tale of a unique Downtown New York business losing the battle against gentrification. Brian Jonestown Massacre, Elvis Perkins in Dearland, Slowdance and A.R.E. Weapons supply the alternative soundtrack. Actress Janell Shirtcliff will lead a discussion at the 7:30 p.m. Dec. 7 showing at Los Angeles’ Egyptian Theatre.