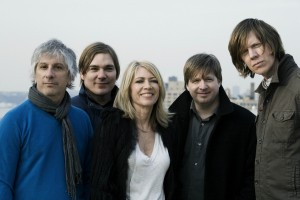 Sonic Youth guitarist Lee Ranaldo confirms via an interview with Rolling Stone what fans of the landmark punk band Sonic Youth have been speculating since co-founders Kim Gordon and Thurston Moore announced in October the end of their marriage after 27 years. There will be no new tours after their recent concerts in South America and no new material as the band takes a break for a while.

“I’m feeling optimistic about the future no matter what happens at this point,” Ranaldo says. “I mean every band runs its course. We’ve been together way longer than any of us ever imagined would happen and it’s been for the most part an incredibly pleasurable ride.”

Ranaldo, who wrote the popular Sonic Youth songs Eric’s Trip, Mote and Skip Tracer, gives longtime fans a sliver of hope confirming that the band will continue to work on some archival projects.

“There’s still a lot of stuff we’re going to continue to do. There’s tons and tons of archival projects and things like that that are still going on, so there are so many ways in which we are tied to each other for the future both musically and in other ways.”

Fellow filmmakers and film buffs worldwide continue to discuss the life and colorful career of director Ken Russell, who died Sunday in his sleep at age 84.

Russell, a lifelong photographer and prolific documentary director for BBC, will continue to be remembered as the undisputed “enfant terrible of British cinema” thanks to his dramatic features, the Oscar-winning 1969 movie Women in Love, famous for its nude wrestling scene between Alan Bates and Oliver Reed; The Devils, starring Vanessa Redgrave, and his later horror films Gothic (1986) and The Lair of the White Worm (1988) as well as the DH Lawrence adaptation The Rainbow.

Speaking to The Guardian, Vanessa Redgrave sums up Russell’s legacy like this: “He was a genius of cinema, an iconoclast.”

Pippa Middleton, younger sister to Duchess of Cambridge Kate and a royal wedding hit thanks to her curve-hugging bridesmaid dress designed by Sarah Burton for Alexander McQueen, is making headlines in publishing circles for a deal to write a party planning book for Michael Joseph, an imprint of Penguin Books U.K.

The Telegraph is reporting a deal reportedly worth $625,000 U.S. for the guide to being the perfect party hostess with recipes and hopefully some anecdotes from her sister’s royal wedding.

Pippa is clearly qualified to write the book as a professional party planner at Table Talk in London and a contributer to the firm’s online newsletter The Party Times. However that hasn’t stopped the literary press from ridiculing the massive advance.

Look for How to Be the Perfect Party Hostess to be published after the Queen’s Diamond Jubilee and in shops just in time for the 2012 holiday party season.

1 comment for “The Morning Feed: Sonic Youth calling it quits, for a while”