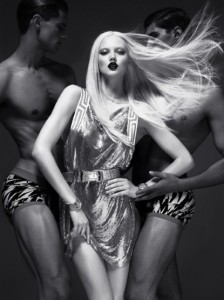 H&M (Hennes & Mauritz) released some conciliatory news for all the shoppers who decided not to camp out last week and arrived too late at stores emptied of all the Versace designer goodies. The style website Refinery 29 reported that Donatella Versace announced a January 19 online launch for a limited edition spring collection at H&M including fruit-printed hot pants, bikinis and shoes.

Of course stateside H&M devotees pointed out that the U.S. still lacked online shopping with the Sweden-based retailer so the January 19 news was the equivalent of showing up at a store and being told they’re out of colored bracelets.

H&M also made available this week some re-stocked pieces from the Versace collection for sale on the H&M website, once again, bad news for U.S. H&M shoppers.

According to The Hollywood Reporter, comic actor Steve Coogan followed up Hugh Grant’s testimony in London’s High Court yesterday for the Leveson Inquiry regarding press standards, ethic and practices and discussed under oath his experience with phone hacking from British media outlets like the recently shuttered News of the World.

“This is not the Steve and Hugh show,” Coogan told the court. “We are here, not with great enthusiasm, to represent all those people who don’t have the stomach for it. It’s not just about us. It is about other people.”

Coogan joined a list of phone-hacking victims giving testimony including Grant, Sienna Miller, Charlotte Church and J.K. Rowling as well as Bob and Sally Dowler, the parents of murdered student Milly Dowler, and Gerry McCann, the father of the missing toddler Madeline McCann.

Coogan added that he only gave interviews when he wanted to support one of his films or projects and was advised against taking legal action over false stories against British newspapers in order to avoid being made an enemy of the press.

“The irony is my closet is empty of skeletons,” Coogan said.

With a new show underway at the Phone Booth Gallery in Long Beach, CA. through Dec. 17, Hi Fructose placed the spotlight on Dutch collage artist Handiedan (Han is the short version of her first name; die translates into ‘that” and dan translates into ‘than’ for a clever pen name). For the show Handiadan: United Taste Of A Miracle, the mixed-media artist made beautiful use of paper materials, sourced objects, ink drawings and classic decorative frames in order to provide a gilded setting for her collages of pinup girls that would make Alberto Vargas proud.