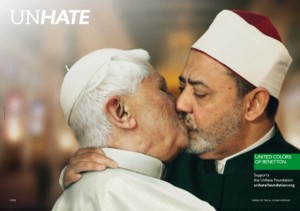 “This shows a grave lack of respect for the pope, an offense to the feelings of believers, a clear demonstration of how publicity can violate the basic rules of respect for people by attracting attention with provocation,” said Vatican spokesperson Federico Lombardi.

Benetton, which apologized for the image after displaying a large billboard of the Pope and the Egyptian Imam kissing near the Vatican, remains committed to its provocative campaign as well as the Unhate Foundation.

U.S. networks rebooting past TV hits is common enough but NBC brings a new level of geekdom to the formula via its announcement of acquiring producer Bryan Fuller’s reboot of The Munsters, the ‘60s comedy starring the late Fred Gwynne as the Frankenstein monster-inspired Herman Munster.

According to Deadline, Fuller, who created the shows Pushing Daisies, Wonderfalls and Dead Like Me, plans to bring back the famous monster family via a one-hour dramatic comedy.

No word yet on casting for Fuller’s pilot since the project remains in the early stages of pre-production.

After all the recent controversy over Academy Awards show co-producer Brett Ratner and on-air host Eddie Murphy abruptly exiting the Oscars telecast in the wake of Ratner’s anti-gay jokes, two-time Golden Globes host Ricky Gervais returns the spotlight to the Hollywood Foreign Press Association (HFPA) by agreeing to emcee its show for a third time.

Steven Zeitchik and Nicole Sperling write in The LA Times that the 83-member HFPA voted to bring Gervais back despite his much-talked-about one-liners and sarcastic gags at last year’s Golden Globes.

A statement on the Golden Globes website also points to a meeting with NBC as a factor for bringing Gervais back for a third time.

Well, in terms of advance publicity, it appears the Golden Globes and the HFPA beat the Oscars by a miracle mile.