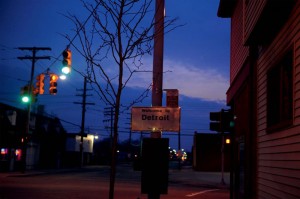 Taubman tells Karen Marta at WWD that she took 40,000 photos over the past ten years and gathered them in her first book as a celebration of the people, factory buildings and places that make Detroit special.

Detroit is struggling through hard economic times, down to just 700,000 residents from a height of 1.8M, but Reyes Taubman points to the weathered beauty of the city’s old factory buildings as something to celebrate.

“I really believe there is no equivalent building to the Packard Plant in the world,” Taubman tells WWD. “The wild thing is that people today who live three or 10 or 15 miles away have no idea of what the Packard Plant meant for our country and for the Second Industrial Revolution, and, above all, that it still exists.”

Detroit: 138 Square Miles comes out November 30 from the Museum of Contemporary Art, Detroit.

Fantasy fans worldwide continue to cheer over Monday’s announcement that David Yates, director of the smash hit Harry Potter and the Deathly Hallows: Part 2 as well as the previous three Harry Potter movies, signed on to direct a big-screen version of the hugely popular BBC sci-fi show Doctor Who.

Fans of the long-running show, which ran from 1963 to 1989 on BBC and returned in 2005 via a successful re-launch, remember the previous feature films Doctor Who and the Daleks (1965) and Doctor Who: Daleks’ Invasion Earth 2150 AD, both starring Peter Cushing as the time traveling alien.

According to The Guardian, Yates says the film will be a “radical transformation” from the hit show.

“We’re looking at writers now,” Yates told Variety. “We’re going to spend two to three years to get it right. It needs quite a radical transformation to take it into the bigger arena.”

While stateside fans clamor for a U.S. tour from Belgian-Australian singer/songwriter and musician Gotye (the stage name for Wouter De Backer), the fast-rising musical artist makes a live appearance today at Santa Monica’s KCRW in support of his import album Making Mirrors.

Critics compare the 31-year-old Melbourne-based artist to Sting and praise the smart pop sensibilities of his singles Eyes Wide Open and Somebody That I Used To Know. Expect Gotye’s KCRW stop to be the first of many U.S. appearances as he looks to expand his fan base worldwide.