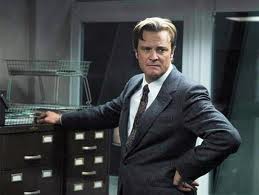 Colin Firth, in a scene from Tinker Tailor Solder Spy, is in talks to join Spike Lee's 'Oldboy'

The 2011 holiday movie season with all its awards-oriented releases is unfolding in rapid fashion but the “Get Me Ron Perlman” column, the only casting news column named after character actor par excellence Ron Perlman, remains focused on future roles that may impact awards season 2012 and beyond.

Colin Firth, Best Actor Oscar winner for his lead performance in The King’s Speech, is in final talks to join Spike Lee’s U.S. remake of Park Chan-wook‘s acclaimed revenge thriller Oldboy. According to the popular fan boy site Twitch Film, Firth is likely to join Oldboy as the villain who kidnaps Josh Brolin’s character and holds him hostage without reason for 15 years. Granted, Batman himself, Christian Bale is also rumored to be in the running for the bad guy role but it’s impossible not to be excited about the prospect of a recent Oscar winner playing the part.

With production wrapping on high-profile franchise movies The Avengers and The Dark Knight Rises, look for the fan boy spotlight to rest upon Skyfall, the 23rd James Bond movie, this time directed by Sam Mendes.

Daniel Craig is back as Agent 007, as well as Judi Dench as his MI6 boss M, with Javier Bardem, Naomie Harris, Ben Whishaw and Ralph Fiennes joining the cast.

Per the online trade Deadline, joining the spy adventure just in time for the start of production are Helen McCrory, soon to be seen in director Martin Scorsese’s 3D adventure Hugo, and Ola Rapace, the former husband of Girl with the Dragon Tattoo star Noomi Rapace. McCrory and Rapace join the cast of Skyfall in unknown roles but rest assured, fan photos and on-set spies will soon provide plenty of details about their characters.

Give credit to Russell Brand for dusting off the stench from his awful comedy remake of Arthur and staying true to his goal of Hollywood stardom.

According to The Hollywood Reporter, Bettany is set to play famed human sexuality expert and educator William Masters. After playing a futuristic vampire hunter in Priest, Bettany probably sees Masters of Sex as a dream job come true.

The week’s biggest casting news belongs to Billy Crystal replacing Eddie Murphy as master of ceremonies on the 2012 Academy Awards. Per The Hollywood Reporter, Crystal returns to Oscars hosting duties in the wake of co-producer Brett Ratner’s sudden resignation in the wake of increasing furor over an anti-gay comment he made at a post-screening Q&A for his comedy Tower Heist. Murphy’s exit comes as no surprise since he joined the Oscars ceremony as a favor to Ratner. Crystal is an Oscar host veteran but it remains to be seen if he can help the awards show shake its dull reputation.