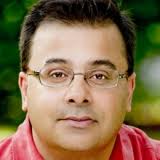 Drive Interstate 75 through the brown fields of industrial Detroit and you’ll see countless stories of hardship and struggle just beyond your car windshield.

Ghazi’s documentary feature, Fordson: Faith, Fasting, Football; takes place in the Detroit suburb of Dearborn, home of the largest concentration of Arabs outside the Middle East.

The majority of Dearborn’s working-class Arab American families send their children to Fordson High School and Ghazi follows four Muslim high school football players during the last ten days of Ramadan as they prepare for the big game with their cross-town rival Dearborn High.

Ghazi tells The Original Feed that he and his crew worked hard to balance the high school sports drama with political themes involving immigration and tolerance as Dearborn’s Arab American community deals with the after-effects of the Sept. 11, 2001 terrorist attacks.

As a result, Fordson: Faith, Fasting, Football; currently playing select AMC theaters nationwide via North Shore Films, celebrates what makes Dearborn unique while emphasizing all that its Arab American community shares with the rest of the country: a passion for sports, a commitment to family and an unwavering love for America.

Q: Fordson: Faith, Fasting, Football combines the universal themes of Friday Night Lights and high school football with the unique challenges facing the Arab American community of Dearborn. How did you balance the two in your movie?

A: I think there’s this commonality of high school football and love for team, family and community pride not just at Fordson but all across the country. Every town and community has their own culture and everyone has a little different way that they tail gate and the way they cheer. There’s uniqueness and that’s one of the great things about America with so many different cultures and races and religions. But we all adopt a love of football and a love of sports and with Fordson it’s Friday Night Lights but the women are in Hijabs, the kids do a prayer from the Koran before each game and there are Shawarma sandwiches sold at the concession stands. So I thought people would be drawn in because of the high school football but they would also be educated about a world they never knew.

Q: Did you always plan to release Fordson: Faith, Fasting, Football around the tenth anniversary of 9/11?

A: When I originally had the idea for the film it was back in 2004 and the tenth anniversary was the furthest thing on my mind. What was on my mind was how Sept. 11 uniquely affected this community due to acts they had nothing to do with. My crew and I were apprehensive at first to release the movie on the anniversary. We wanted to be sensitive. But we had a number of people, from military people to people who lost good friends at the World Trade Center, who told us that they appreciated the sensitivity of the film and that we told a story that had not yet been told.

Q: You and your crew pull back the curtain on Dearborn’s Arab American community. What are you hoping audiences learn about Dearborn from your film that they don’t see in most news coverage?

A: You’re right. The news media has frequently gone to Dearborn but you can’t get a feeling for who people are in thirty-second sound bites. My goal was to take people into the homes, hearts and the minds of the people of Dearborn and to get an idea about their family units and their value systems. I tell people it’s not just a story about Americans and Muslims. It’s an American story about immigrant communities. We have  a tremendous history in this country about immigrant communities going through challenges and coming out of them stronger and becoming  part of the fabric of America.

Dearborn’s Arab Americans may pray in a mosque. Their clothing may be different. They may have certain food and dietary restrictions but they’re here for the very same reasons of everybody else with an immigrant relative. They came for freedom of religion. They come for better job opportunities and to educate their kids. That’s the message; that they have all adopted many of the same American values and customs but like all minority groups they maintain the cultural characteristics of their motherlands.

Q: There’s a deep feeling of patriotism that runs throughout Fordson: Faith, Football, Fasting; despite all the intolerance Dearborn’s Arab Americans experience on a daily basis. Where you surprised by this community’s patriotic fever?

A: I did not go into Dearborn thinking that I was going to have a patriotic film. I went there expecting a little bit more of a depressive film about a community struggling and people being kicked around. What I found was a sense of pride and defiance. Patriotism became a theme over and over again as the adults shared with me their tremendous love for this country and their appreciation for the opportunities to create their own businesses.

I also think that many second and third and fourth generation Americans for some reason think that patriotism is for theirs to own and not for other immigrant groups to have. I think you can be patriotic no matter what religion you are and no matter what race you are if you’re an American and you live in this country.