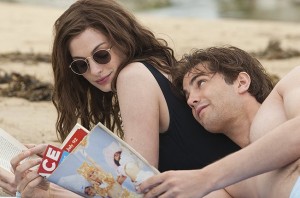 Long after the reporting of the weekend’s top-earning movies became an evening news fixture; past the rising popularity of showbiz websites dedicated solely to box office reporting, I wrote indieWire’s weekly box office column for a couple of years and paid rapt attention to the financial successes and failures of movies big and small.

A colleague of mine jokingly pegged me a “Box Office Guru” because I spent so much time pouring over box office details. I was also sharply criticized for being part of the “problem” by an exec at a specialty distributor. He said columnists like me were persuading moviegoers to evaluate art-house movies based on their earnings; just like Hollywood blockbusters.

I decided to add the Box Office Guru column to The Original Feed because I remained convinced of the deeper stories, big-picture trends and small-release success stories that come out of the earnings stats day after day. Like I told the specialty exec who cursed the day box office reporting shifted beyond the Hollywood trades and into mainstream media, the problem wasn’t box office reporting per se, but box office reporting that failed to connect the creative stories to the numbers.

Poor reviews hampered the opening of the Focus Features romance One Day, based on the popular novel by David Nicholls and starring Anne Hathaway as the beloved heroine Emma Morley and Jim Sturgess as her university friend and would-be lover Dexter Mayhew.

One Day opened on 1,721 screens and earned $5,079,566 for a mediocre $2,952 per-screen average; far below the whopping $9,389 per-screen average director Lone Scherfig’s previous British romance An Education earned from its opening weekend in October 2009.

Without strong word-of-mouth from even the book’s most die-hard fans, One Day looked to fade at the box office despite Hathaway’s impressive publicity work on behalf of the movie. The Help, based on Kathryn Stockett’s bestseller, continued its grip on adult moviegoers with $20 million in weekend earnings and $73.9 million through Monday and proved to be tough competition for One Day.

Poor reviews also crippled the 3-D fantasy Conan the Barbarian from Lionsgate and starring Jason Momoa in the role made famous by Arnold Schwarzenegger.

Conan’s poor results of $10 million in debut weekend box office on 4,500 screens at 3,015 locations (2,100 of the locations were 3-D) placed the remake on the summer flop pile and eliminated any chances of a sequel.

Granted, reviews always mattered more to a specialty release like One Day so its poor showing made sense. Conan proved that genre fans also pay attention to reviews when they’re not entirely sold on the movie. The Fright Night remake also supported that argument with lackluster weekend earnings of $8.1 million from 4,600 screens.

Mysteries of Lisbon, the epic and final film from the late Chilean director Raul Ruiz, who passed at age 70 on August 19, continued to draw sizable crowds to its single booking at the Elinor Bunin Munroe Film Center at the Film Society of Lincoln Center. Mysteries of Lisbon, despite limited showings due to its 4 hour and 17 minute running time and 20-minute intermission earned $6,323 from its single screen for $51,622 in total earnings for Music Box Films.