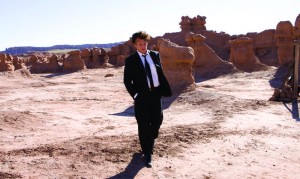 Filmmaker Terrence Malick won the prestigious Palme d’Or award for The Tree of Life, a drama about a 1950s Texas family, starring Brad Pitt as a somewhat stern father and Sean Penn in a present-day storyline as the grown son to Pitt’s character.

Malick earned strong reviews for his artful drama that makes a poetic connection between a 1950s family and the creation of life. According to The Guardian, Penn recently spoke to the French newspaper Le Figaro and complained that the movie left him confused and disappointed.

“The screenplay is the most magnificent one that I’ve ever read but I couldn’t find that same emotion on screen,” Penn said. “A clearer and more conventional narrative would have helped the film without, in my opinion, lessening its beauty and impact. Frankly, I’m still trying to figure out what I’m doing there and what I was supposed to add in that context. What’s more, Terry himself never managed to explain it to me clearly.”

Still, Penn did offer a cautious endorsement of the movie.

“Nevertheless it’s a film that I recommend provided one goes in without preconceptions.”

Cleveland rapper Machine Gun Kelly (MGK) organized an August 20 flash mob at the food court of the South Park mall in Strongsville Ohio. Despite a small turnout of three people including MGK — little flash and no mob — Nerve reported that Strongville police arrested MGK and the two participants and charged them with disorderly conduct.

MGK referred to the incident as making a statement, meaning that flash mobs are officially over.

OK Go joined The Fray, My Morning Jacket and Weezer on The Green Album, a collection of alt bands and musicians performing new takes on Muppets tunes such as Rainbow Connection and Movin’ Right Along.

Nice photo gallery at Hi-Fructose of the Oslo mural project launched in response to the recent terror attacks.

Artists The London Police, D*face worked on the massive Oslo murals scheduled to be part of an upcoming art walk and charity auction.

← Get Me Ron Perlman! Christian Bale Reunites with Terrence Malick on New Drama
Box Office Guru: ‘One Day’ Stumbles in its Debut; just like ‘Conan’ →