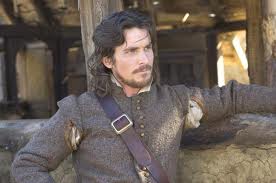 Christian Bale in 'The New World,' is reuniting with director Terrence Malick.

The summer 2011 movie season is winding down and this week’s “Get Me Ron Perlman” column, the only casting news column named after character actor par excellence Ron Perlman, starts off with news of a Bridesmaids cast member joining a couple of new projects.

Rebel Wilson, who played Brynn, one of the annoying roommates to Kristen Wiig’s character Annie, in the blockbuster comedy Bridesmaids, joins Isla Fisher, Kirsten Dunst, Lizzy Caplan and Adam Scott in the comedy Bachelorette, about three friends (Fisher, Dunst and Caplan) invited to be bridesmaids by a girl (Wilson) they used to tease in high school. According to The Hollywood Reporter, Bachelorette is the latest movie role for Wilson after What To Expect When You’re Expecting, director Kirk Jones‘ adaptation of the popular pregnancy guide starring Cameron Diaz, Brooklyn Decker and Jennifer Lopez as well as director McG’s action comedy This Means War starring Tom Hardy, Chris Pine and Reese Witherspoon.

Filmmaker Tony Scott signs on to the Warner Bros. reboot of the 1969 Sam Peckinpah western The Wild Bunch starring William Holden, Ernest Borgnine, Robert Ryan and Warren Oates. Deadline reports that Brian Helgeland is writing the first draft based on Scott and producer Jerry Weintraub’s ideas for the movie.

Scott’s filmmaker sib Ridley Scott is making bigger news by signing on to direct a “follow-up” to his 1982 sci-fi movie Blade Runner for Warner Bros. and Alcon Entertainment.

“We’re very fortunate that Ridley Scott has decided to come back to one of his seminal movies,” Alcon co-head Andrew Kosove tells The Hollywood Reporter. “And with Ridley, I can tell you it will be fresh and original.”

No word yet on how Ridley plans to update the original film based on Philip K. Dick’s story Do Androids Dream of Electric Sheep? but Kosove cautions fans not to expect Harrison Ford to return in the role of replicant-hunting cop Rick Deckard.

Ridley Scott continues to work on the Alien prequel Prometheus, from Fox, due in theaters June 8, 2012.

Christian Bale is staying busy on the streets of Pittsburgh filming the final installment of director Christopher Nolan’s Batman trilogy The Dark Knight Rises. Proof of his commitment to art cinema is Bale’s recent announcement via The Playlist that’s he reuniting with his The New World director Terrence Malick on an unnamed new drama. No word on the female lead for the new Malick movie although Rooney Mara, Mia Wasikowska, and Clemence Poesy are all contenders for the female part.