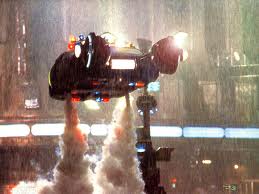 Ridley Scott to revisit 'Blade Runner' for a new movie

Ridley Scott continued work on his highly secretive Alien prequel Prometheus, starring Charlize Theron, Michael Fassbender and Idris Elba among others. The veteran director also agreed to return to another one of his classic sci-fi franchises, his 1982 film Blade Runner.

According to The Hollywood Reporter, Scott partnered with Alcon Entertainment and producer Bud Yorkin on a “follow-up” to the original film based on Philip K. Dick‘s story Do Androids Dream of Electric Sheep? and starring Harrison Ford as weary cop Rick Deckard searching for murderous androids on the loose.

“We’re very fortunate that Ridley Scott has decided to come back to one of his seminal movies,” Alcon co-head Andrew Kosove said. “And with Ridley, I can tell you it will be fresh and original.”

Kosove added that he expected to start meeting with writers for the new Blade Runner movie soon.

They lowered the lights on Broadway upon news of playwright, essayist and screenwriter Wendy Wasserstein’s tragic death from lymphoma five years ago at age 55. Megan O’Grady in Vogue reviewed the first official biography published on Wasserstein’s life and work, Julie Salamon’s Wendy and the Lost Boys (Penguin Press). In addition to her standout plays, the Tony Award-winning and Pulitzer Prize-winning The Heidi Chronicles (1988), The Sisters Rosenweig (1992) and her last play Third, Wasserstein wrote stories about feminist thought, sexual politics, family ethnicity and popular culture.

The Brooklyn-born playwright lived a private life, with regards to her young daughter Lucy Jane, and her sudden illness.

For O’Grady, reading Wendy and the Lost Boys offered fans of Wasserstein’s work a chance to match her fascinating personal life with the rise of feminism and a successful theatrical career.

Melbourne Australia natives and L.A. transplants Dabs Myla opened a solo show at Thinkspace Gallery in Culver City (on display through Sept. 3) after wowing Angelenos with their mural on the side of the Neptune Building, a collaboration with the sibling graffiti artists How and Nosm and part of the LA Freewalls project.

High Fructose visited the Thinkspace show and raved about the collaborative duo and their colorful use of their living room furniture, their interpretation of ‘50s pop culture, bold characters and Disneyland-inspired drawings. Dabs Myla continued to build a devoted following with their T-shirt designs, murals and installations but the Thinkspace Gallery show pushed their artwork to a new level.