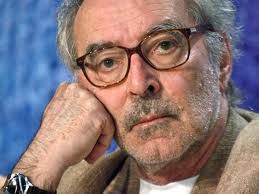 Jean-Luc Godard’s latest work, Film Socialisme, self-described as a “symphony in three movements,” that unfolds on a Mediterranean cruise ship and a gas station in rural Switzerland, continued its slow and steady, worldwide expansion since playing film festivals last year.

Helping promote the film’s U.K. release, in competition with Harry Potter and the Deathly Hallows: Part 2, no less, the 80-year-old co-founder of the Nouvelle Vague spoke to The Guardian and quickly stripped himself of his trademark “auteur” status.

“I am not an auteur, well, not now anyway,” Godard said, speaking in Paris. “We once believed we were auteurs but we weren’t. We had no idea, really. Film is over. It’s sad. Nobody is really exploring it but what to do? And anyway, with mobile phones and everything, everyone is now an auteur.”

Thankfully, Godard didn’t announce his retirement from filmmaking (giving up his legendary auteur label is newsworthy enough). In fact, he ended the interview playfully handing off his next script to the journalist as proof that his impressive career isn’t over just yet.

Staffed as an authentic travel agency and programmed with promotional events and real tours like The Edible Liberty Tour, where the growing middle class of Chinese tourists will experience the edible wild plants and mushrooms of Manhattan’s Central Park, Rothenberg told the arts website Hyperallergic that she wanted to reach real tourists as well as arts audiences with the Beijing installation.

“The project is more like a platform for discourse,” she said. “There’s this whole emerging middle class in China and the tourism industry has really boomed. I’ve seen the mass consumer culture grow in the past five years.”

Fantasy fans celebrated Tuesday’s release of George R.R. Martin’s A Dance With Dragons, the fifth installment of his popular Song of Ice and Fire series and the follow-up to 2005’s installment A Fear for Crows.

Reviewer Jeff VanderMeer in The Los Angeles Times compared Martin’s writing to Jack Vance and encouraged people to read the adventures of Tyrion Lannister, the dragon queen Daenerys Targaryen and the clairvoyant boy Bran Stark, among others before settling for its TV adaptation, the HBO series Game of Thrones.

Martin was just happy that the book was officially available to fans after an Amazon Germany employee accidentally shipped 180 copies of the book a week early.

“At Park Pictures we have had the opportunity to work closely with many talented directors in the commercial arena and it is a natural evolution for our company to grow and to work in the feature film arena as well,” Kelman Bisbee said in a release. Robot & Frank is a beautiful story that’s both touching, and at times very funny. We are enjoying the process of bringing this film to reality.”

Park Features also announced its upcoming projects including the directorial debut of Lance Accord, who directed the popular Volkswagen ad The Force, as well as a project from British director Ringan Ledwidge.