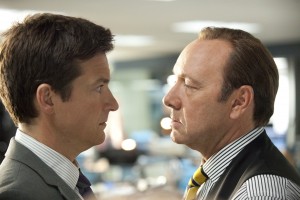 The showiest scenes in director Seth Gordon’s workplace-as-hell comedy Horrible Bosses belongs to veteran comic actress Jennifer Aniston who looks fit and fabulous as a sex-crazed dentist with a bottle tan, come-hither make up and an obsession with her assistant Dale Arbus (Charlie Day).

Aniston brings welcome sex appeal to the buddies-in-distress comedy via revealing wardrobe choices that includes black lingerie and a white dentist’s jacket with nothing beneath except panties. To Aniston’s credit, she overturns her good girl persona with gusto and delivers one of her funnier big-screen performances to date.

Still, the film’s steady laughs and standout moments have little to do with Aniston’s showy behavior or any of the outrageous, Hangover-influenced, no-limits gags scattered throughout the movie.

As Nick Hendricks, a buttoned-down middle manager willing to accept whatever his dishonest boss Dave Harken (Kevin Spacey) unloads, Jason Bateman makes perfect use of his calm voice, cautious demeanor and average Joe looks that make him the best comic hero around.

Bateman (Arrested Development) makes Nick an intelligent man with good intentions incapable of rising above the surrounding nuttiness as he and his friends Dale (Day) and Kurt Buckman (Jason Sudeikis) team up to kill their despicable bosses.

The recently engaged Arbus can’t cope with his boss’ constant groping despite her good looks. After the death of his beloved boss and company owner, Buckman, the company accountant, reports to the former owner’s coke-addicted son Bobby Pellit (Colin Farrell) who wants to use the business as his personal checking account. Convinced they cannot afford to quit their jobs, the three buds rationalize killing their bosses in order to make their workplaces sane.

The acting talent overflows in Horrible Bosses with Bateman leading the way and Aniston enjoying the spotlight.

Despite a comic premise every moviegoer can embrace, screenwriters John Francis Daley (Waiting), Michael Markowitz (The Flamingo Kid) and Jonathan Goldstein ($#*! My Dad Says) never push the plot beyond its core gag and fail to take full advantage of the film’s comic potential.

Charlie Day gives a likable, aw-shucks performance similar to his role on the hit FX sitcom It’s Always Sunny in Philadelphia but Jason Sudeikis falls flat as the ladies man of the trio.

Jamie Foxx is hilarious as “murder consultant” Dean “Mother F*cker” Jones who coaches the pals on how to murder their bosses without getting caught.

Colin Farrell is unrecognizable as the obnoxious Pallit but he’s given little to do that’s actually funny.

As Nick’s boss, Kevin Spacey channels his mean-spirited movie producer character from Swimming with Sharks and makes Dave Harken the most horrible of the film’s three horrible bosses.

P.J. Byrne enjoys the best scene as a friend of the trio’s and a busted, former Lehman Brothers broker who will do anything for money.

Unfortunately, the climactic payoff shares more in common with a TV cop drama than a comedy and the trio’s comeuppance with Aniston’s character feels like an afterthought.

Seth Gordon’s best film remains the documentary The King of Kong: A Fistful of Quarters, a funny and heartfelt character study of obsessive Donkey Kong players. In Horrible Bosses, Gordon tries to out-gross Kristen Wiig and her girlfriends in Bridesmaids and out-shock the boys of The Hangover Parts 1 and 2.

If Gordon would have stayed true to his storytelling beliefs from King of Kong and emphasized characters and relationships as much as shock comedy, then, maybe, Horrible Bosses could have been as funny as Bridesmaids instead of the half-baked comedy it turns out to be.