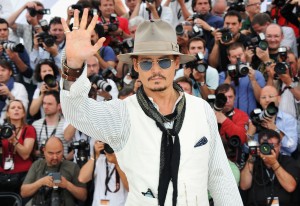 The 64th Cannes Film Festival wrapped up its opening weekend festivities and the crowds went crazy for Johnny Depp and the rest of his Pirates of the Caribbean colleagues as they hit the Croisette to promote the fourth installment in the series, Pirates of the Caribbean: On Stranger Tides. Critics teased that the fans were jubilant because they hadn’t watched the latest film yet. Still, producer Jerry Bruckheimer matched the fans’ goodwill with promises of more Pirates films.

“There’s much more fun to be had,” Bruckheimer told The Guardian. “As long as the scripts are good and we’re working with filmmakers such as Rob Marshall, we’re all good.”

German artist and Seattle transplant Trimpin premiered his experimental opera The Gurs Zyklus (The Gurs Cycle) May 14 at Memorial Auditorium at Stanford University. According to The L.A. Times, Trimpin made great use of his extraordinary sound sculptures including giant teeter-totters, a Ferris wheel that projects photos and a fire organ made of Bunsen burners and glass tubes to tell the story of a Nazi internment camp that was used as a way station in the French Pyrenees for Jews bound for Auschwitz. Four singers and a narrator brought a human element to the video projections and sound sculptures in the 73-minute opera. Still based on the review, Trimpin’s elaborate art works were the stars of the show.

The Erbil Literature Festival wrapped May 9 in the Northern city and capital of Iraqi Kurdistan. With various readings and seminars held in Erbil’s ancient citadel and numerous other venues, the literature festival was a welcome alternative to the frequent stories about political strife and U.S. military occupation that determine how the world sees Iraq and much of the Middle East.

Sponsored by the British Council and featuring Arabic and Kurdish writers together at panels, readings and round-table discussions, the Erbil Literature Festival proved that literature can be a force for diplomacy.

“We have too many poets in Iraq,” Dr. Saad Iskander told The Telegraph. “Everyone wants to be a poet but we need writers who archive who use facts and primary sources.”

Shoppers at the various concept stores for Japanese designer Rei Kawakubo’s fashion line Commes des Garçons or Rem Koolhaas’s Prada store in Manhattan’s Soho neighborhood learned years ago that great architecture and interior design go hand-in-hand with luxury fashion. A cool photo gallery in Gizmodo was a great reminder that artful stores can exist outside the world of high fashion. Javier Maya’s Pave bicycle store in Barcelona displayed its two-wheel goods with the style and flair equal to what one experiences walking the rotunda at the Guggenheim.