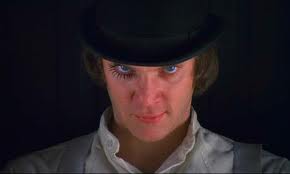 The 64th Cannes Film Festival continued today with Angelina Jolie’s photo call in support of the DreamWorks animated feature Kung Fu Panda 2 attracting much of the media attention. For the cinema buffs on the Croisette, the bigger news was the May 19 festival screening of a newly restored version of Stanley Kubrick’s 1971 masterpiece A Clockwork Orange to help promote an upcoming 40th anniversary Blu-ray release and iTunes download.

As reported by The Guardian, Clockwork Orange star Malcolm McDowell reminded fans of the moral panic that erupted when Kubrick’s adaptation of the Anthony Burgess novel about Alex, a sadistic gang leader clad in a white jumpsuit and a black bowler hat, and his cruel rehabilitation by the state, first landed in cinemas in 1971.

Kubrick caved in to politicians who blamed the film for copycat crimes and withdrew the film in England in 1974.

Forty years later, McDowell pointed to the Cannes screening as proof that audiences have finally caught up with Kubrick’s black, comic intentions for the movie.

“When we made the film 40 years ago, we made it as a comedy, albeit a very black one,” McDowell said. “There was a lot of humor but when it came out because it was so startling and shocking people just sat there dead silent. At the end they didn’t move out of their seats. Of course, I know it has a lot of violence and stuff but it’s more psychological than ketchup on the screen. Now audiences take it how we meant it. They really have a good time and laugh. They caught up with it.”

Singer George Michael announced his next album would reflect his experience as an openly gay middle-aged man and said he hoped the album would help undo some of the homophobia his private life has generated.

“I’m looking to work with gay and gay-friendly artists,” Michael told The Independent. “It will be a collective with some songs sung by myself and some songs by unknown gay artists. I have a serious problem with the fact that every time I made a big mistake I definitely felt I was letting young gay people down because of the homophobia that was thrown at me and the wording of that homophobia.”

Michael, 47, and former member of the pop duo Wham!, also announced a new tour with a symphony orchestra including dates at London’s Royal Opers House and Paris’ Garnier opera house.

Mike Petty, a commercial filmmaker and owner of Moving Still Productions, shared his latest short film No Joy of the abandoned Joyland Amusement Park in Wichita Kansas on the video sharing site Vimeo. Granted, the background music felt hokey but his close-up images of the abandoned rides and wide-screen footage of the park itself proved to be stunning.

Producers of TV dramas talked to the L.A. Times about the challenge of engaging distracted TV viewers who watch their favorite shows while operating their favorite mobile devices.

“Most people are watching TV with a laptop on their legs,” said Laurie Zaks, executive producer of the ABC mystery Castle. If you don’t capture the audience in the first two episodes you don’t have a chance.”

Zaks and other producers pointed to the hard-knock odds they’re facing these days: five of the 22 new TV dramas that premiered on ABC, NBC, CBS, Fox and CW won’t be back next season.

Shawn Ryan understood the challenges first-hand. Despite good views and solid audiences, Fox axed any sophomore season for his cop drama The Chicago Code soon after its midseason premiere.

“There is a cynicism that if it’s good and complicated it is going to get cancelled,” Ryan said. “People don’t want to get emotionally involved.”

Don’t think cable is the sole answer. FX cancelled both its boxing drama Lights Out and Ryan’s Terriers after one season.