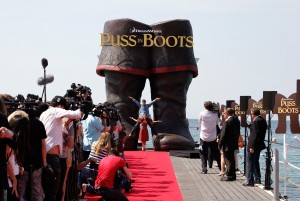 The 64th Cannes Film Festival started today with a photo call for the DreamWorks animated feature Puss in Boots and The Weinstein Company made the first deal by buying U.S. rights as well as some key foreign territories for The Artist, a black-and-white silent film about a silent movie star in 1927 Hollywood worried about the impact of talking pictures on his career.

Hoping for a sales announcement of their own, Wide Management agreed to handle international sales for This Is Not A Film, by Iranian filmmakers Jafar Panahi and Mojtaba Mirtahmasb, an intimate look at Panahi awaiting the verdict on his court appeal regarding his charges of propaganda against the state, scheduled to screen May 20 out of competition.

“The reality of being alive and the dream of keeping cinema alive motivated us to go through the existing limitations in Iranian cinema,” Panahi and Mirtahmasb said in a statement to Screen Daily. “The existing possibilities in cinema have convinced us that a filmmaker has only himself to blame if he is unable to make films.”

Critics described Belgian-born artist and Mexico City resident Francis Alÿs as an “elongated Charlie Chaplin” when describing his performance in various video pieces like Re-enactments (2001); walking through Mexico City streets with a loaded gun in his hand, or Tornado, his latest work, as he chases a tornado.

“First you see it, probably a couple of miles away and it’s pretty fast,” Alÿs told Vogue. “Often, there’s one following the other. So if you miss the first one, there’s a good chance that you get another.”

The 51-year-old artist and Mexico City resident for the past 25 years also created additional paintings, drawings and photographs to help explain his ideas of rehearsal and re-enactment in his installations When Faith Moves Mountains (2002) and Rehearsal 1 (Ensayo 1) (1999-2001) at the exhibition Francis Alÿs: A Story of Deception at MoMa in New York through August 1.

Doctor Who lead writer and executive producer Steven Moffat criticized overzealous fans that take to the web and give away plot details in advance in a recent interview on BBC Radio 5. Granted, these hardcore Who fanatics have helped make Doctor Who a sci-fi smash but Moffat slammed fans who blow the show’s cliffhangers in advance as “vandals.”

“It’s heartbreaking in a way because you’re trying to tell stories and stories depend on surprise,” Moffat said in The Independent. “Stories depend on shocking people. Stories are the moments that you didn’t see coming, that are what live in you and burn in you forever. If you are denied those, it’s vandalism.”