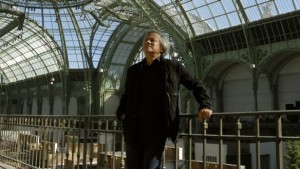 Indian artist Anish Kapoor prepared the unveiling of his towering new sculpture Leviathan for the Monumenta 2011 exhibit at the Grand Palais in Paris and used the opportunity to speak on behalf of imprisoned Chinese artist Ai Weiwei.

Weiwei, 53, was last seen when policed stopped him from boarding a flight at Beijing airport April 3.

According to The Telegraph, Kapoor urged the world’s museums to close for one day in a unified protest of Weiwei’s imprisonment.

“As artists we have a communal voice and it’s important that we stick together,” Kapoor said.

Kapoor went on to describe Leviathan, on display at the Grand Palais through June 23, as an “attempt to turn the building inside out.” He also spoke highly of Weiwei’s work.

Actor Hugh Jackman also donated his time, energy and worldwide celebrity to a good cause. The Wolverine star and Broadway song-and-dance man filmed a PSA encouraging people to take part in the Live Below the Line campaign from the Global Poverty Project.

According to The Los Angeles Times, Jackman asked people to go an entire work week spending less than $1.50 U.S. on food in order to experience the type of impoverished life shared by many people around the world.

“This is an incredible campaign that really gives us the chance to understand the realities of extreme poverty,” said Jackman, who’s also on the board for the Global Poverty Project.

Google recently announced plans to expand their headquarters via a new 10-acre campus in Mountain View, CA. Public art fans celebrated Google’s decision to hire German architect firm Ingenhoven to design the new campus. Founder Christoph Ingenhoven and his firm designed some of Europes most interesting projects including Stuttgart’s main station, which can be seen in a photo gallery at Gizmodo.

Missed the most recent Saturday Night Live (SNL) with Tina Fey hosting? The fine folks at Pitchfork posted the funniest bit from the show, a digital short from the comedy team The Lonely Island (Andy Samberg, Akiva Schaffer and Jorma Taccone) featuring guest artist Michael Bolton belting “Jack Sparrow,” a song inspired by Bolton’s love for the Pirates of the Caribbean movies.

Let’s hope the newest movie in the Pirates franchise, Pirates of the Caribbean: On Stranger Tides is as clever.