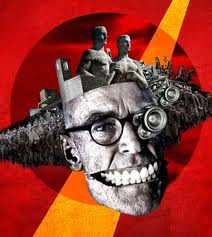 Despite standout fantasy movies like Brazil, 12 Monkeys and The Imaginarium of Doctor Parnassus, filmmaker Terry Gilliam consistently struggled to secure financing for his features. So fans weren’t surprised to watch Gilliam step to the left and stage his first opera, a large-scale production of Berlioz’s The Damnation of Faust, for the English National Opera.

Gilliam received enthusiastic acclaim for his inventive staging that updated the story to World War I Germany though the rise of Nazism to a World War II concentration camp and The Telegraph singled out his collaboration with designer Hildegard Bechtler and the performances of Peter Hoare as Faust and Christopher Purves as Mephistopheles.

Gilliam was reportedly worried about working with Berlioz’s score and the singers. Still, opera probably felt like a breeze compared to all his recent moviemaking headaches.

According to The Guardian, guest artists Jack White and Norah Jones received the lion’s share of attention for collaborating with Burton and Luppi. True to the project’s origins in Italian cinema, Burton gathered musicians who performed on original Ennio Morricone soundtracks to work on Rome.

Director Massimo D’Anolfi received the Special Jury Price Prize for an International Feature for The Castle, about the daily tasks for the border security staff at Milan’s Malpensa Airport.

The Best Canadian Feature prize went to Julia Ivanova’s Family Portrait in Black and White, about an orphanage in Ukraine where a woman raises 16 abandoned mixed-race children.

The HBO Emerging Artist Award went to Polish filmmaker Michael Marczak for his film At the Edge of Russia, about a young recruit who works at an isolated Arctic military post.

According to Deadline, Rasoulof’s Good Bye (Be Omid e Didar), about a young lawyer in Tehran in search of a visa to leave his country, became an official selection in Un Certain Regard with its debut screening May 13.

This Is Not A Film, by Pahahi and co-director Mojtaba Mirtahmasb, an intimate look at Panahi awaiting the verdict on his court appeal regarding his charges of propaganda against the state, was scheduled to screen May 20 out of competition.

“Mohammad Rasoulof’s film and the conditions under which it was made and Jafar Panahi’s diary of the days of his life as an artist not allowed to work are by their very existence a resistance to the legal action which affects them,” Jacob andFrémaux said in a joint statement. “That they sent them to Cannes, at the same time, the same year when they face the same fate is an act of courage along with an incredible artistic message.”