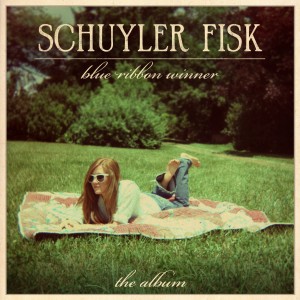 Call actress and musician Schuyler Fisk (her first name is pronounced Sky-ler) an early bloomer and no one will question the tag. The Charlottesville, VA native and Los Angeles transplant has numerous films on her impressive bio including American Gun, Orange County and the indie favorite I’m Reed Fish.

Using acting as a launching pad to bigger and more courageous creative goals, Fisk, 28, is also a soulful singer and songwriter who’s crisscrossed the country in support of her 2009 self-released, debut album The Good Stuff.

Soak in Fisk’s strawberry hair and freckly cheeks and it’s an ah-ha moment when you remember that she’s the daughter of Oscar-winning actress Sissy Spacek and acclaimed production designer Jack Fisk.

It’s worth remembering that Spacek left her Texas hometown as a teen to try being a folk singer in New York and ended up becoming an actress.

Fisk is following in her mom’s inspirational footsteps but tweaks the formula by emphasizing music over movies. Her sophomore release Blue Ribbon Winner continues to attract new fans since its March 1 release.

While her famous mom had to choose between acting and music, Fisk sets out to do it all — and more.

The Original Feed: Do you consider yourself an artist out of time? I look at the Billboard Hot 100 chart and it seems to me that that your soulful ballads have a hard time reaching the largest audiences possible whereas 35 years ago Joni Mitchell enjoyed massive radio play. How you feel about today’s popular music and the recent win by Arcade Fire at the Grammys?

Schuyler Fisk: “Hmm, great question. Sometimes I do think I was born in the wrong era, ha-ha. But I think the beautiful thing about music today is that there is so much of it; it’s all so different, and all at our fingertips. I love listening to artists like Joni, Dylan, etc. They have influenced me as a writer and performer so much, and although I would love to hop back in time sometimes to experience what it would be like to be in the music scene back then, there is something about the ever-changing music business of today that excites me. I love that I can have these connections with my fans and that people can discover me and my music in so many ways thanks to the Internet, Facebook and Twitter. Of course I would love to reach as big of an audience as I can, but I do love the slow build that I’ve been experiencing. There is something so gratifying to me about being the underdog in music today. It’s more of a challenge, and I like that.”

OF: How do you feel about being a balladeer in 2011? What are the tools at your disposal that someone like Loretta Lynn did not have when she starting performing?

SF: “I just feel lucky to get to write the music that I love and that people are responding positively to it. I love being a writer in 2011 because there is this feeling that there are no rules anymore in music or in the business. I can kind of do what I want. As far as what tools I have that Loretta did not, I mean, the Internet! iTunes, and all the outlets that allow me to get my music out there digitally. It’s so incredible! Things are different now and it’s exciting. But there is something so incredible about the way it used to be- driving around to the radio stations like Loretta did, using her confidence and persistence to really get out there and make it by pounding the pavement.”

OF: Many musical artists also work in film and TV with great success, Kris Kristofferson for example. What came easy to you working for director Gus Van Sant on his film Restless? What was surprisingly nerve-wracking?

SF: “It’s true. There is a lot of crossover. Funny how it seems people have more credibility going from music to acting and not the other way around. I enjoy both acting and music so much. As a kid I loved musical theater because it combined the two, but as I got older they became very separate things for me. Working with Gus was amazing. What was nerve-wracking for me was probably how few takes we did. The last track on Blue Ribbon Winner, “Waterbird,” was inspired by that film.”

OF: Your father is a production designer and your mom an acclaimed actress, so creativity is in your genes. What part of your artistry do you consider a family trait and constantly thank your parents for handing down to you? What part of your talent do you claim as your own and take pride in accomplishing with your hard work?

SF: “My parents really pushed me and my sister to “follow our bliss.” Of course, growing up in our house, it was cool to be an artist, and being creative and pursuing our talents were always encouraged. I credit my parents for everything! They support me and love me and, of course, they made me! I don’t know what parts of my talents I claim solely, but it’s not really about that. I feel that I was blessed with certain gifts, but then there is a point where you have to make that gift into something, and that’s constantly evolving. The thing that I take pride in the most is the fact that I am a songwriter.”

OF: Some artists stay busy with the day-to-day and always focus on the project at hand. What about you? Are you a big picture person? I mean, you’re 28 and busy at work in support of your sophomore album but maybe you take the time to look ahead to your thirties and beyond and plan far-reaching goals? What are you artistic goals? Where do you see yourself in ten years, as a musician, as an actress, as an artist?

SF: “I really try to stay in the moment and not worry about what’s next too much. That said, I have a long list of things I want to do next creatively, so I’m just going to see what I feel is right for me when I have time to focus on the next thing. I am happiest when I am busy, so I try to continue to be creative whether that is doing a film, making a record, touring, collaborating on other musical side-projects, being the wardrobe designer for my sisters’ films… I don’t have a master plan of where my life will take me, and I like that. I am open to see what I feel inspired to do and what’s next. In my ideal world, I will continue making music, making records, touring, doing films, collaborating on other projects, and doing some designing; and when I’m ready, I’d love to have a family and encourage my children’s artistic instincts.”

Schuyler Fisk’s sophomore album Blue Ribbon Winner is available via iTunes, Amazon and in stores through her own label Cassidy Barks.