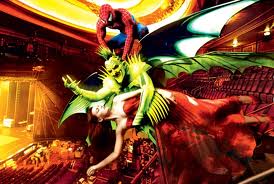 Director and co-author Julie Taymor became the latest departure from the troubled Broadway show Spider-Man: Turn Off the Dark following injured actors Natalie Mendoza (concussion) and Christopher Tierney (cracked vertebrae and skull fracture) through the exit doors. According to The New York Daily News, word of Taymor’s departure coincided with lead producers Michael Cohl and Jeremiah J. Harris temporarily shutting down the show for a major overhaul at a cost of $1.3 million and postponing opening night for three months.

“I will say this about these producers,” said an unnamed source. “They will do whatever it takes. They want a great show. When others would have given up, they will not.”

Summit Entertainment, the studio behind The Twilight Saga, announced plans to co-produce a movie based on the BP oil spill and the Deepwater Horizon disaster. According to Empire, Participant Media, producer of the education crisis doc Waiting For Superman, joined the project as co-rights holders of the story. Hopes for a serious drama akin to The China Syndrome were dashed with news of Lorenzo Di Bonaventura (Salt, Transformers) coming on-board as a producer and Ninja Assassin scribe Matthew Sand adapting The New York Times article that inspired the movie.

“This film will portray the great heroism that took place last year on the Deepwater Horizon rig,” said Summit’s president Eric Feig. “The piece in The New York Times evoked the raw emotion these brave men experienced and endured throughout the tragedy that took place in April last year and we hope to evoke the same emotions for our audience.”

Movie audiences in Mexico regained the chance to watch the documentary Presunto Culpable (Presumed Guilty) after an appeals court in Mexico City ruled that a previous judge’s suspension of the film violated freedom of information.

According to London’s Guardian, Presunto Culpable, about Antoio Zuniga, 26, convicted of a 2005 murder based on scant evidence, reached number two at the Mexican box office last weekend after Rango. Presunto Culpable also received the audience award for best international feature at the 2010 Los Angeles Film Festival.

News shifted from Charlie Sheen’s outrageous public rants via Twitter and his Sheen’s Korner webisodes to the list of actors Two and a Half Men creator Chuck Lorre planned to consider to replace the recently fired Sheen.

According to The New York Post, Rob Lowe from NBC’s Parks and Recreation and Showtime’s Californication joined Woody Harrelson, Jeremy Piven, Jerry O’Connell on the list of top candidates.

Meanwhile, Sheen doused his own chances of being re-hired with more rants against Lorre.

“You picked a fight with a warlock, you little worm,” Sheen said in his latest webisode. “Remember this, after your first drink back, the drink you know you want.”