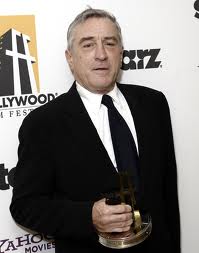 Film buffs jumped for joy at the news that Robert De Niro agreed to re-team with his Taxi Driver and Raging Bull director Martin Scorsese for The Irishman, a drama about a union leader who becomes a hit man. According to London’s Independent, De Niro said the film’s based on a novel by Charles Brandt with Steve Zallian writing the script.

“It’s about a guy who is, and I believe the book says he’s now passed away, but he confessed that he killed Hoffa and also Joe Gallo over here on Hester Street,” De Niro said. “And so I’m going to play that character and Joe Pesci’s gonna be in it and Al Pacino is going to be in it and Marty’s going to direct it.”

The Irishman, set to begin production later this year, would be the ninth collaboration between De Niro and Scorese.

On the subject of veteran filmmakers, Woody Allen confirmed that his next movie (storyline and title under wraps, of course) would be shot in Rome this summer. According to The Hollywood Reporter, the 75-year-old Allen recently shot films in London (You Will Meet A Tall Dark Stranger), Barcelona (Vicky Cristina Barcelona) and Paris (Midnight in Paris).

“I love these sophisticated cities and it’s fantastic to have the possibility to work there,” Allen said in a recent interview. “Each time it is for me like a declaration of love for a certain place. I try to project my feelings for places that are important to me onto the big screen.”

Gwyneth Paltrow continued talks for a record deal and The New York Post reported that the 38-year-old actress is close to signing with Atlantic Records. After showcasing her singing pipes at the Grammys, the Oscars and two episodes of Glee, Paltrow planned to record a Country Western album as a follow-up to her singing in the film Country Strong.

Charlie Sheen kept his picture in the papers via his public approval of the recent SNL skit with Bill Hader playing Sheen as a crazed talk show host. Perhaps Hader’s comic spin inspired Sheen to host his own bizarre webcasts called Sheen’s Korner. Meanwhile, actor Bradley Cooper shattered rumors that Sheen would make a cameo in The Hangover 2 for the simple fact that shooting already ended on the movie.

“It’s an interesting thing to start spreading,” Cooper told People. “You would have to part of the Starship Enterprise in order to make that happen.”

Clearly, nobody told Cooper that as a “Rock Star From Mars,” Sheen can make just about anything happen.